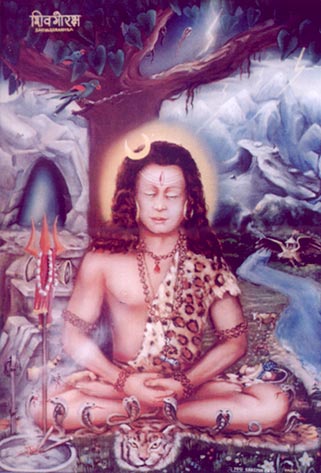 One who can turn this black universe to an enlightenment is Goraksha. The word Goraksha is a Sanskrit name of Gorakh Nath. Goraksha founded the “Nath” Sect hundreds of years ago. He also founded the hath yoga and kundalini yoga. His doctrines believes in self enlightenment.

The word “Goraksha” has hundreds of meanings. If you go into the deep of Goraksha you will meet the absolute truth. Some of the popular meanings of word “Goraksha” are Cow Protector, Absolute Truth and Controlling Senses.

There is no strong evidences available from the history which can tell you when he was borne and when he died. He is considered to be a supreme form of Lord Shiva, and therefore neither had birth nor death. He appears occasionally to accomplish specific goals only. He is an eternal who remains available in the beginning of this universe and the end of this universe. He is popularly called as

Goraksha highly believes in yogic practices and with yogic practices one can achieve an enlightenment. He doesn’t believe in a concept of GOD and supreme power. His doctrines concentrate on experiencing the self only.

Gurkhas of Nepal also take their name from Goraksha. Gorakhpur, the district headquarters of Gorakhpur District, is believed to derive its name from Guru Gorakh Nath.

Goraksha says one who is living with absolute truth is my master. I am a student of the absolute truth. Whenever I feel like I live with him otherwise I stay alone.

Who is a Master?

Goraksha defines a master as:

Goraksha says one who pursues yoga practices, one who doesn’t indulge himself into the senses & sex and one who live beyond Maya is a true “Yogi”.

Goraksha says anyone can be a yogi if follow the rules has already been set by me in the beginning of this universe. Whether you are a bachelor or a married, anyone can perform the yogic practices and attain the enlightenment in its life. Being a married also, you can also keep away yourself from senses and sex. If you do sex with your partner for a child only then I call you as “Yogi” but if you do sex with your partner for enjoyment then I call you as “Bhogi”. Anyone who indulge himself in sex for enjoyment, will not attain the enlightenment with yogic practices. Enjoyment whether its from sex or any other things is under the rule of Maya. You need to live beyond Maya to make yourself as “Yogi”. More you get into the deep of yogic practice and start pursuing the practices for a longer time, it will keep you away from Maya. Try to associate yourself with yogic practices only. Do not associate yourself with things which gives power to your senses. Power to senses generate a seed of sex. Senses and sex are the forces of nature that always keep you away from absolute truth. By doing the yogic practices, you can control the forces of nature. You must believe in experiencing the self only. With yogic practices only, you can experience yourself else is a rule of a Maya. Goraksha says absolute truth is a GOD. With yogic practices, you can reach the absolute truth else there is no other way around. I am a master, I help you in controlling your senses and sex so that you can live beyond Maya. I am an absolute path and an absolute truth. When you attain the enlightenment by pursuing the yogic doctrines formed by me, you will find yourself in the beginning and in the end. Hence you will become an eternal.

Who is a Yogi?

Goraksha says I am the master and the “Alakh Purush”. I formed the “Alakh Niranjan” for yogis who live beyond Maya.

Goraksha says “Die O Jogi Die, death is very sweet but die in such a manner so that you will achieve what myself has achieved”.

What a wonderful statement he said. Death is the ultimate truth of life. Death is a supreme rule applicable to all written by a nature (“Maya”). Every body has to follow it. With all senses, we have to die one day. It’s like if you see a night dream in which you will find yourself associated with your loved ones but when you wake up in the morning, you see there is nobody with you. Similarly with all senses, you find, there are many people who love you but when you die you will find nobody with you. You will find yourself alone in this universe. You will find yourself as you were earlier before death. Only difference that you see is you have lost your body only and rest all will be same as you were earlier. Only soul will be left. Then your soul will start looking for another body to full fill its desires. Soul with desires will look for another body while soul with no desires is supposed to called as an eternal. It’s like what you would like to achieve in your life. Then you make efforts to achieve it. It’s your soul only while your body is just a medium of doing it.

Hence die only once and become an eternal spirit.

Goraksha says love to death because only after death you can become an eternal. You will see yourself in the beginning and the end of this universe after death.

Goraksha says I live beyond Maya. So you have to die in a manner I stated if you want to meet me. Without yogic practices, you with all senses is like a dead body. You can purify your soul to that level with yogic practices till the time your soul have control on your senses and body. Once you will be able to achieve it, I say now you are die in a manner like I died. You will see a difference between now and what you were earlier after the death.

To become an eternal spirit, you need to die in a manner like I died. You do not need to believe on any supreme power because supreme power is nothing but a “Maya”. So you have to live beyond it by pursuing the yogic doctrines. Universal Goddess is Maya and God is one who control the Goddess. But God has to live with Goddess to control her. So believe in experiencing the self and start doing the practices that’s how only you can live beyond its creation(God & Goddess).

Goraksha says “Zero is not the universe and universe is not the zero. Like is so infinite, and imperceptible. The child speaks on crest in the cosmos, How will you give a name to it?.

Goraksha only talks about the goal. Goraksha says “Your goal should be to turn this black universe into the light by doing the yogic practices.” He says goal is most important and we need to concentrate on the goal only. One has to experience himself first without starting believing in GOD and supreme power. If you start experiencing yourself, you will meet the supreme power whenever you attain the enlightenment. Meeting with supreme power is possible once you become eternal. Hence there is no need to believe in supreme power to become an eternal. It all happens due to yogic practices. Once you attain the enlightenment you will see both master and student has lost. You will see only yourself in the beginning and the end of this universe. Those who believe in God and Supreme power, its very difficult to understand the words of Goraksha. Goraksha neither forbids believing in god nor he gives his agreement. Goraksha direct his disciples towards the absolute path so that they can attain enlightenment (absolute truth).

Goraksha says "God himself is my student, Dada Matsyendra is my son. Without guru you cannot get into the absolute path of an absolute truth that is why I resorted the backward way of life and accepted Dada Matsyendra as my master.

Goraksha says I do not have a necessity of a master because I am an eternal spirit. I am the one who was in the beginning of the universe and I will remain as eternal after the end of this universe. However I accepted Dada Matsyendra as my master just to show an example to my students and disciples that one must have a master before you start pursuing the Yogic practices formed by me. This is also to the reason that false people will not say Goraksha has achieved the supreme spirit without having the master. I am the one who formed the Yogic practices (Hath Yoga and Kundalini Yoga). You should learn all these practices from a master only. It's not easy to learn these practices without a master. So to become a yogi, you need a master.

Goraksha says “God himself is my student”. Goraksha said this statement based on his experiences. In a Yog Samadhi, Goraksha reached to a level where he saw himself only and no one else to be there. He reached the enlightenment. He met an absolute truth. So what he says is belief in supreme power or God is just based on the inexperienced facts. Once you experience the enlightenment, you will see that you are the only one who remains in the beginning and the end. You will not see any supreme power with you. You will become an eternal.

To achieve the absolute truth, belief in God is one of the many techniques. But this techniques will bind you with its rules and concepts. Your thinking towards the truth will get limited. So you need find out a path like that of Buddha. Buddha were able to search the absolute truth and reached the enlightenment without believing in supreme power and God. He became the supreme spirit. Supreme spirit is an extended form of your self only.